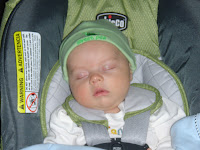 Success...sort of. So we have three days (I think) of putting Nate in his bed at night while he is still awake and having the fortune of him falling to sleep on his own. Of course this requires a pacifier and constant assistance from mom and dad to put the pacifier back in. But still - YAY! He had been sleeping for 6 or 7 hours a night, but he seems to lose a couple of hours with this new method. Don't know what I think of that trade off! Someone just woke up and is grumpy....
Posted by Amber@Nater Tot at 5:22 PM
Sleeping Rituals
2009-09-29T17:22:00-04:00
Amber@Nater Tot
newborn|sleeping|
Comments 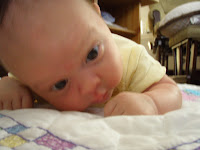 If you have told me a year ago that I would find it cute watching a human grunt and his face turn red while he tried to poop, I would have never believed it. Yet, it is the most adorable thing to watch Nate squirm and strain trying to poop out liquid. Poor thing. Adorable thing.
Posted by Amber@Nater Tot at 10:44 AM
Pooper
2009-09-21T10:44:00-04:00
Amber@Nater Tot
newborn|
Comments

It's surprisingly difficult to find the time to type even just a quick paragraph a day. So a quick list of my favorite Nate things: the softness of the bottoms of his feet, the feel of his hair on the back of his head, his soft warm breath when it hits my face, his funny faces and stretches when he's trying (for an hour) to drag himself out of sleep. I love every moment I'm with him.
Posted by Amber@Nater Tot at 6:49 PM
Favorite Things
2009-09-10T18:49:00-04:00
Amber@Nater Tot
newborn|
Comments

I was changing Nate's diaper at four this morning when I did a double take - his umbilical cord finally fell off! I couldn't find it at first, but eventually located it in his onesie as he was nursing. It's funny, as unsightly as the shriveled black stump was, it makes me a little sad that the last tangible evidence of our physical connection is gone. His pudgy tummy is incredibly adorable though, so I know I'll get over it.

Nate is such a good baby. He'll be alert, calm and content for hours at a time. This afternoon he did quite a good job at holding his little head up while he laid on his stomach. He also showed a lot of new interest in his book - especially the crinkly noises and the rattle. He's ridiculously cute. Especially when he shows his sophistication by dining with his pinky extended.
Posted by Amber@Nater Tot at 4:45 PM
No More Stump!
2009-09-04T16:45:00-04:00
Amber@Nater Tot
belly button|newborn|
Comments

I can't believe he's already three weeks old! I want to remember everything. His soft skin, his cuddly little baby body, all of his expressions. I know I won't be able to remember EVERYTHING, so I'm going to try to write a little each day about him.
He's on the verge of waking up, so I'll make this entry quick. Speaking of naps - after he's had a long nap he squirms and makes noise for a good half an hour. I keep thinking, he's awake - but no, he's just being squirmy. It's my theory that he likes sleeping as much as his mom and is fighting waking up. 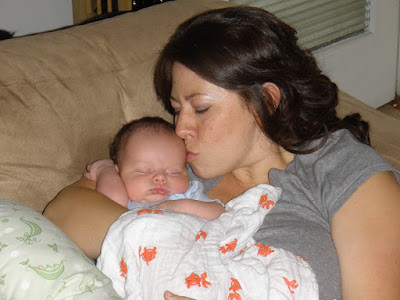