Using Sign Language With Your Hearing Baby - The Basics

I knew I wanted to use American Sign Language (ASL) with my baby before I was even pregnant. I don't know where I first heard of using it with babies, but something about sign language has always appealed to me. It may have to do with all of the fantastic work that's done with primates (I was an anthropology major in undergrad) or the fact that my girlfriend and I would pretend we were deaf at clubs in college to get ugly guys to leave us alone (our interpreter would explain that we danced by feeling the bass). So when Nate came along, I jumped at the chance to find out more about signing.

My primary goal in using sign language with Nate is to enable him to be able to communicate with us before he's able to speak. Not only is it cool, but it's supposed to minimize frustration and promote bonding. That's enough for me, but I also discovered that there are a ton of other benefits. Hearing babies who sign tend to have much bigger vocabularies, higher IQs, develop both sides of their brain at a higher rate and do better at reading and spelling.


How do you sign with your baby? Well, basically, it's a way of incorporating signs into your conversations with your baby. You can use just a few signs (or hundreds) and if you are consistent your baby will eventually be able to communicate with you by signing back to you before they are able to speak. Make sure you always say the word while you are signing it, because you want your baby to connect the spoken word to the sign and the meaning. Here are some examples  - you can sign MILK (squeeze your first like you're milking a cow) as you're nursing or giving him a bottle and say "don't you like your milk?"; sign MORE (tap your finger tips together) after you've given her some food and ask her if she would like some more; when he looks up at that ceiling fan you can say "yes that's a FAN" while making the sign (point your finger up and move it in a circle). Here's a picture of Nate signing FAN: 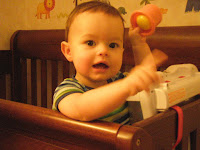 . I also went to the free classes at the library.

Once your baby starts signing back, it is absolutely amazing. As I mentioned in an earlier post (here), Nate made his first sign MORE at 10 months. He can now tell me when he wants more of something, but he also uses it as a general "I want  that" statement. It is much more preferable to grunting and pointing (although there is plenty of that too). Shortly after, he started signing FAN, which was not surprising since he has been obsessed with the ceiling fans all of his life. He has now added WASHING MACHINE (click here for the sign) of all things to his regular repertoire and HAT (pat your head twice). Occasionally he'll sign other things when he sees me do it, but they haven't made it as regulars yet.

The drawbacks? Well contrary to popular belief, it won't take your baby longer to talk (as long as you always speak while signing). You may, however, have to explain 50 to 60 times a day that yes, the washing machine is over there, but no, Mommy is not doing any laundry today.

Donald and I sign with Charlotte too, so there's this part of me that wants to go on and on and on and write a comment as long as this post just to tell you that I love it.

But there's this other part of me, the part that loves a good sense of humor, that is winning out. And that part of me is saying that when I pulled up your blog, it said "Nater Tot" in the title bar. NATER TOT. THAT IS HILARIOUS. Just like that, you won my everlasting love.

Hi. I hope you don't mind I added your blog as a link in my mommy blog. Let me know if you do and I will remove it. Really interested in this stuff though!
http://bellorel.wordpress.com

Sarah - Nater Tot still makes me giggle and we've been calling him that for months.

Meaghan - I'm honored! Thank you so much. I just started a "sign of the week" post with you in mind, so check it out.

I love baby sign! It's so fun and amazing to watch your little one be able to communicate so early. I'm not as good at it as I would like to be but I'm working on it and she is picking it up so quickly. Even if she doesn't now how to do the sign herself she seems to understand it better then if I just said the word alone. Great post!!

I don't have any children yet..but I AM DEFINITELY going to employ your strategy of teaching sign language...I love the implications...and I am also sure that must create a different type of bond with your baby also because you are able to communicate with your baby more meaningfully, earlier on. I love it!

To say that one waits a lifetime for his soulmate to come around is a paradox. People eventually get sick of waiting, take a chance on someone, and by the art of commitment become soulmates, which takes a lifetime to perfect. See the link below for more info.

There are certain point in our life that we encounter failure but it doesn't mean you will lose hope and give up everything but it only means that every failure there's an exchange and that is new beginning. Well, thank you for sharing your article and keep on posting. Visit my site too for more information.


I am very happy to locate your website. I just wanted to thank you for the time you spent on this great article. I definitely enjoyed reading it and I have you bookmarked to check out new stuff you post.