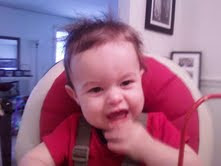 When I told our pediatrician that Nate had some new mealtime habits - he now refuses former favorite foods, like pears & applesauce and he enjoys throwing his food over the side of the highchair tray - she recommended I check out the American Academy of Pediatrics (AAP)  Food Fights: Winning the Nutritional Challenges of Parenthood Armed with Insight, Humor, and a Bottle of Ketchup

. So I did, and I have mixed thoughts.


Part of me wants to tell every parent-to-be to get this book. There is a lot of good information. The sentence that really hit home for me: "Part of the problem with parenthood is that nobody ever tells you just exactly on which day a nutritional necessity such as middle-of-the-night feedings or a bedtime bottle suddenly becomes a bad habit in the making." So true! You start off practicing demand feeding and rocking your newborn to sleep and all of a sudden you have an older infant with all kinds of problematic sleep associations. This book does do a good job of pointing out those areas that can lead to problems down the road.  If only I had read  the chapter "Drinking and Dozing Don't Mix" long ago.


The chapter on starting solids is also very informative, with a great introduction to feeding your baby "real food." Amidst the constant hokey (often forced) jokes is a good deal of valuable information on nutrition. I find there's very little warmth to it however. As my friend pointed out, you've got to go to Dr. Sears

So what else is missing? I think two things. First, with the exception of the final three paragraphs, I think there is very little acknowledgment about what is realistic. There is a sense while reading it that if you don't follow their instructions, you will COMPLETELY SCREW YOUR KID UP.

And second (and what is bothering me a great deal), is that I think they are creating what Best for Babes calls a booby trap - "the cultural and institutional barriers that keep mothers from making informed feeding decisions and carrying them out. 'Most moms want to breastfeed, and don’t realize how they are being undermined by the very institutions that should be helping them. Whether they breastfeed for 2 weeks, 2 months, 2 years or not at all, they deserve to achieve their personal goals.'" I think the AAP is sending out mixed signals and undermining their own recommendations regarding breastfeeding.
The AAP recommends breastfeeding exclusively for six months and support for breastfeeding for the first year and beyond as long as mutually desired by mother and child (while the WHO and many other nations recommend breastfeeding until 2 years of age). Yet this book, put out by the AAP, reads as though they expect that most readers will be formula feeding. There is very little mention of breastfeeding in general, and one of the only times it's mentioned is a warning that if the baby is taking in more than 32 ounces, more "food" may be in order. What really bothers me though is that there is ZERO guidance with respect to nutrition and breastfeeding after one year of age. It's as though with one side of their mouth they are encouraging breastfeeding until at least a year, but with the other side they never expect you to get to that point or give you any guidance how to do so.

My advice? Get it. But take what they say with a grain of salt. And if you want to breastfeed, also look at other more supportive sources like The Womanly Art of Breastfeeding

(which I have to admit I've not yet read, but La Leche League is well known for its unwavering support for breastfeeding).
Posted by Amber@Nater Tot at 9:52 PM