Baby Signing Tip: Keep an Eye Out for Approximations 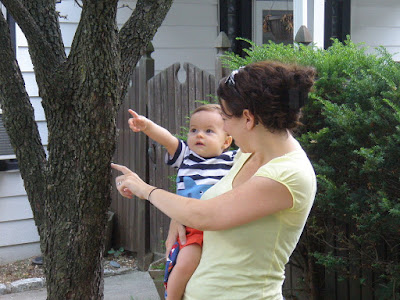 Dave and I just realized that Nate has been signing AIRPLANE for quite some time...he just does it a little differently. Instead of extending the pinkie and thumb, he just extends the forefinger - which we mistook as pointing. We realized that he was signing airplane when we spoke about one indoors and he made the sign. He clearly wasn't pointing at the plane in the sky indoors, he was signing!

Apparently this is a common approximation. In What Do You See?

of the Signing Smart series (fantastic interactive books for babies which show a simple sentence along with a picture of both a baby and an adult making the sign), the baby makes the AIRPLANE sign using only the forefinger as well. I better keep my eyes peeled for more signs!

Oh my goodness, this is my life. Charlotte signs 'more' by tapping only her index fingers together and then she gets so excited that she starts clapping. It took me like two months to figure out that she wasn't trying to clap, she was trying to sign, but was just too proud of herself to keep it up lol.

I mean, you know that kids speak a modified English, but it never occurred to me that there would be modified signing...

Haha - the same thing happened with Nate! I think he was also "clapping" for a month before we figured it out.