It Might Be Time to Erect That Statue: Ferber Nights 1 & 2

Nate started out life as an excellent sleeper. By three weeks his was sleeping 7 hours stretches at night and I began mommy hood feeling totally blessed and shockingly rested. Look at this happy little sleeper: 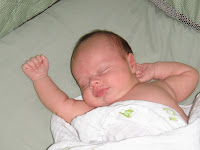 Then by the time he was four months, we started to notice that he wasn't really napping anymore and he was waking up more often in the middle of the night. We started a regular bedtime routine and hoped things would get better. I assumed I was being punished for any & all previous bragging regarding his sleep habits. Our pediatrician told us to put him to bed at night crying, close the door and come back 12 hours later. Seriously. We changed pediatricians. And we took sleep any way we could get it. 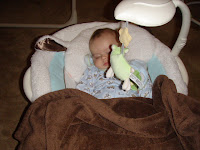 Between five and six months we knew we had a serious problem. On good nights he was waking up several times, on bad nights he would wake up hourly. Naps were 20 minutes long. I was a zombie. So I did what I always do - survey other parents and read books. Dave and I knew that any sleep training requiring "crying it out" (CIO) was just not right for our family. I'm a softy and didn't want to do something that felt so inherently wrong. I want to comfort my baby when he needs me. So we began to look for a more gentle approach to sleep training.
The first method we tried: The No-Cry Sleep Solution: Gentle Ways to Help Your Baby Sleep Through the Night

. We learned the importance of naps and the effects of being overtired. We tried to push a lovey on him. With an earlier bedtime and a focus on naps we started to see some improvement. We knew the key was for Nate to sooth himself to sleep in the beginning of the night, so that he could sooth himself back to sleep when he inevitably woke up in the middle of the night as all people do. First we had to get rid of the sleep associations he had, like rocking and sucking to sleep. We tried this for a month. We were getting closer, but not quite there.
Pretty much everyone we know told us that the only way we were going to solve his sleep problems was through crying it out. So many sang Ferber's

's praises. But I am very, very stubborn. I had to fix our problems without the torture of hours of crying. While we did flirt with idea of Ferberizing after particularly bad nights, we just didn't think it was something we could commit to. Why go through hours and days of crying only to give up? A partner at Dave's firm said - "you say that now, but mark my words, in a couple of months you will be erecting a statue to the man."
I kept researching methods to improve Nate's sleep. Meanwhile, the focus on naps was getting ridiculous. There seemed to be a definite correlation between length of naps and quality of nighttime sleep. But the only way I could get the kid to sleep was with movement. For weeks (months? yes it was months) I strolled for HOURS a day. Because it wasn't like I could stroll him until he fell asleep and then let him finish his nap. Any movement woke him up. Any sound woke him up. I strolled around the neighborhood like a character in a video game avoiding the random barking dogs and chain saws (literally!) that appeared out of nowhere. And when I couldn't stroll, I drove. I was crazed.
Next up: The Sleep Lady's Good Night, Sleep Tight: Gentle Proven Solutions to Help Your Child Sleep Well and Wake Up Happy

. This method resulted in some crying at bedtime, but not a lot. We were finally able to make real progress where Nate was falling asleep with little or no assistance from us. There seemed to be light at the end of the tunnel. I started to move the naps to the crib. Little by little we saw improvement. Things were getting manageable...even pleasant.

Then. Then we took a trip. Well, two. Routine's nemesis. And in the span of a week Nate was sitting up by himself, pulling himself up to standing, signing for the first time AND teething. All the progress we made slowly started to unravel. And the old methods weren't effective anymore because he was standing up in his crib bouncing and smiling at bedtime. This is blurry, but look how proud he is to have pulled himself up for the first time! 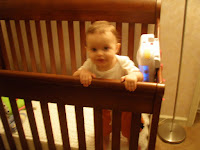 And we were back to hourly wake up calls. And we just. couldn't. do it. anymore. Once again, Ferber called out to me, taunting and teasing me. And then I heard that my friend had successfully ferberized her very active (and adorable) daughter. So I gave up. I ordered it: Solve Your Child's Sleep Problems: New, Revised, and Expanded Edition

By the time it was delivered to my door, things had gotten so bad that I was eager to try it. I was done being a mommy martyr and I was done having Nate suffer night after night of broken sleep. Night one (last night), went like this:
NIGHT ONE
6:15 pm  - bedtime routine: bath, jammies, story, say goodnight to all of the animals on the walls, nurse
6:54 pm  - said good night & handed him off to Dave, Dave put him in crib, said goodnight and left
6:57 pm - Dave goes in after 3 min and tries to comfort him without picking him up
7:04 pm - Dave goes in after 5 min and discovers Nate has cried so hard that he has thrown up. I go in to help. He projectile vomits. We feel awful but thought this might happen (since [a] it's common [b] the previous week he worked himself up so much he threw up and [c] his mama is a puker too), so we matter of factly clean him up, change his jammies and sheet. He throws up a third time. Dave changes his jammies again. I kiss my sweet, poor, screaming baby and leave. I feel evil. Dave puts him in his crib and leaves.
7:21 pm - Dave prepares to go in after 7 min, but what is that? No more crying? Is he ...ASLEEP? How do we know he didn't just knock himself unconscious? I sneak in and confirm that he is alive AND ASLEEP.
7:51 pm - He wakes up after 30 min (very common for him).
7:54 pm - I wait 3 min and go to "comfort" him by his bedside
8:00 pm - After 5 min, he's ALREADY ASLEEP! What? We were prepared for hours of crying.
He slept until 6:00am with only one wake up around 1am! I quickly fed him and put him back to in his crib. I was in and out in about 10 min. We're working on completely eliminating the night feedings, but Ferbs says not to cut it out cold turkey. So except for the vomiting, this is awesome. But I don't want to start counting my chickens yet.
DAY TWO
Both naps fail.
NIGHT TWO
6:15 pm - bedtime routine
6:51 pm - after I hand him off to Dave, he puts him in his crib and leaves.
SILENCE.
NO CRYING. OH MY GOD. Is this really working this quickly?
7:19 pm - he wakes up after a half an hour. I prepare to wait 5 min. He cries for 20 seconds and then FALLS BACK TO SLEEP.
We are gathering materials for the statue.
Posted by Amber@Nater Tot at 8:48 PM

Sorry I'm being a comment-crazy tonight...

In all of your reading did you see the incredibly sage advice to put two mattress pads and sheets (layered) on the crib. If any type of sheet changing needs to be done in the middle of the night you simply strip the top layer and put the kid back to bed! Ivy has had two stomach bugs that appeared in the midnight hours and I was NEVER so glad to have had that tip because WHO wants to change bedding in the middle of the night!