Admittedly, my main motivation for seeking out non-toxic toys is the health of my son. I would love to proclaim that I'm "green mom of the year" but I'm so not.  Sure, I'm trying. I want to be a good role model for Nate. But, it's a huge thing if I actually remember to bring my reusable shopping bags to the store (at least I have some!). So it's always icing on the cake when I purchase something from a company that makes an effort to be environmentally conscious. It makes me feel good to know that our hard earned dollars are going to companies that care about the future of our planet.  So here's a sampling of some great non-toxic toys made by environmentally friendly companies. 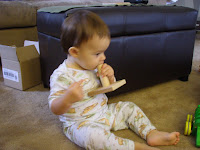 Nate received this as a gift from an incredibly thoughtful relative. His favorite part? The post that the rings go on. He could chew it and bang things with it all day long. I hadn't heard of Little Sapling Toys before and now I'm hooked. Their toys are simple and beautiful. I want everything on their website. Check out all of the ways in which they are a green company here. They even plant a tree for every toy sold. And every toy is made in Idaho. I'm always happier to support products made in the USA.
Green Toys My First Blocks

Back in March, when I saw at ZRecs that Green Toys had developed new toys for toddlers, I went online and pre-ordered the entire line. He was about eight or nine months when we got the blocks, the tug boat

. He liked them all, but not nearly as much as he does now, at twelve months. The toys are made from recycled milk jugs and are BPA, PVC and phthalate-free. You get a lot for your money with the blocks - they're pretty large, with 18 blocks in five different styles. Oh, and they're made in the USA too!

I also got this after reading about it over at ZRecs. We got it when Nate was around eight months and I was so disappointed. It was tiny and Nate didn't look at it twice. But now? He is OBSESSED with it. The age recommendation is for 12 months and up, and I should have listened. He absolutely loves rolling it, crawling with it in his hand, banging it against some other wood balls he has - and of course, putting it in his mouth. All of the Wonderworld toys are made from rubber wood - a replenishable source.
Plan Toys Dancing Alligator

I LOVE Plan Toys. Their toys are wooden and range from the simple to the imaginative. All of the Plan Toys products we have were a hit with Nate. We got him this alligator pull toy for his birthday, even though he can't walk yet. He thinks the click clack noise is quite funny and loves pulling it toward him while he's sitting. I imagine that once he's walking, it will be even more of a hit. Read all about Plan Toys here. Their commitment to social responsibility is incredibly impressive.