Nate's been pulling himself up and cruising around the furniture for over three months. The day before his first birthday, Nate took his first unaided step. So we've known that any day now Nate is just going to take off. I have mixed emotions - on one hand I know I will be so excited and proud when he starts walking, but on the other hand... even more work! He's a handful now and he's just crawling. Here he is, sporting his baby mullet (we must fix that soon!): 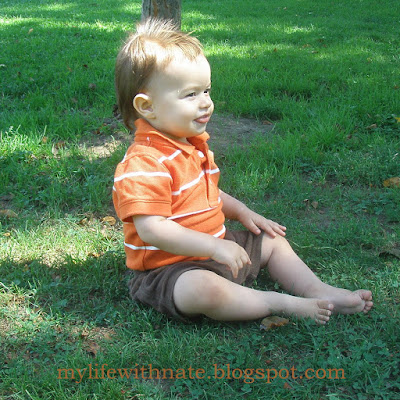 Nate's newest spoken word (as opposed to the baby signs he's learning that you can read about here) is balloon. That one little word - "boon" - is just about the sweetest sound in the world to me right now. So in order to encourage it's liberal use around our home, we went to the store on Friday to buy a helium boon. We came out of the store with a Tweety balloon (in order to encourage the cutest baby sign ever - BIRD - which you can watch here) tied to his stroller. It was a blustery day, so I was sure to tie it tight to the stroller so that it could withstand the abuse that Nate would inevitably inflict on it.
We enjoyed that balloon for a good sixty seconds. Then right before our eyes it lifted off and flew away. Bye-bye boon. I had not made sure that the string was tied tightly to the balloon itself. Good job, mom. I was much more upset than Nate. He still had the string to play with, after all.
So yesterday, Dave took Nate for a stroll while I stayed home to iron and fold socks. When they returned, Nate had another Tweety balloon tied to his stroller. BOON! I was so excited that this one survived. Yay, Dad! We cut it off the stroller while Nate waited anxiously, standing, holding onto his stroller with one hand. I put the balloon in his free hand and JUST LIKE THAT, he took off. The little stumble bunny took five or six steps - proudly grasping that string on his balloon - before he crashed onto the ground.
It was so exciting and adorable. And Dave and I BOTH got to see it. We tried throughout the day to recreate the moment, but no such luck. I think our days of chasing the speed crawler are limited.