Since Nate and I use sign language in public, the topic of signing comes up with other parents at parks and playgroups. They often tell me that they tried signing, but it didn't really work. I don't  usually press them for details because it's awkward enough talking to complete strangers when the only thing you obviously have in common is that both of your children want that truck and are willing to shed blood over it.

Okay, maybe sign language doesn't work for everyone. But if I did delve further into their practice of sign language at home, I bet I would hear some of the following complaints: "I tried it but she never signed back," "I didn't have time to learn a bunch of signs," or "I found it hard to continue to use the signs."  For those parents I would offer the following bits of advice:

Patience
It can take awhile for your baby to sign back. In fact, it can take months. Most babies don't have the fine motor skills to make signs until nine or ten months. Even then, the gestures they make won't necessarily look like the ones you are making. I began signing with Nate when he was four months old. It took over five months before I saw his first sign (MORE).  Older children certainly learn signs more quickly, but it can still take weeks for them to catch on.

Perseverance
During those five months of waiting I wondered if I was wasting my time. I wondered if I should just give up. Even after he made those first few signs, it took him awhile to add any more. Now, at thirteen months he signs over thirty signs regularly. I am so glad I waited it out. It can certainly be disheartening to spend your time learning signs, incorporating them into your conversations and teaching them to other family members only to have your little one stare back at you blankly. But trust me, once your baby starts signing back to you that effort is absolutely worth it.

Nate has now been signing back to us for about four months. For the first time the other day he made the sign for MILK, which is often a baby's first sign. You just never know what will float their little boat. Some of Nate's first signs were FAN and  WASHING MACHINE. Not the EAT, ALL DONE and WATER I had been signing for months. So if you are overwhelmed with learning a ton of signs my advice is to learn just a couple of signs for things you know your little one loves.  Then use them regularly. The more interested in the topic your baby is, the more motivated he'll be to sign about it. For instance, Nate loves pancakes. I looked up the sign, showed it to him and the very next morning he was requesting PANCAKES for breakfast. Can't say I blame him. 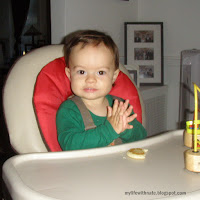 Signing parents - what are your tips/advice regarding baby sign language?


*     *     *
Organic-Mama.Ca just posted a fantastic giveaway - the most adorable organic hat from Adrienne Kinsella Handcrafted Goods and Artworks. Click here to enter the giveaway. The hat looks like an acorn. An ACORN! So cute.
Posted by Amber@Nater Tot at 10:03 PM