There are a lot of benefits to using sign language with your baby or toddler - you can enjoy two way communication with your pre-verbal child, signing children often have a larger (speaking and signing) vocabulary at an early age and research has indicated that elementary school children who signed as babies have higher IQs and superior communication skills than their non-signing peers. But there is another advantage that I've been hearing about, one that I've been crossing my fingers and hoping we benefit from: the ability to ease frustration in order to avoid toddler temper tantrums. And I got my wish the other night!

Anyone who has experienced sleep problems with their baby will inevitably read about the importance of establishing a bedtime routine. As I've discussed many times, we have battled with sleep for most of Nate's life. So we've had a bedtime routine established since he was about four months old. It's been altered here and there but has been pretty consistent for the last several months.

We start with a bath, since Nate has loved bath time since he was born. After his bath we sing a song we made up (a creative little ditty I like to call "warm & dry") and then wrestle his diaper and pajamas on.  We play soft music (usually Rockabye Baby! Lullaby Renditions of U2), dim the lights and say good night to all of the animals on

the walls, his sheets and just about every inanimate object in the room. We sit in the glider, read a bedtime story and then nurse. Now that Nate's been "ferberized" (you can read about why we made that difficult choice here and here), I make sure he doesn't fall asleep while he's eating. When Nate's done nursing, I turn off the light and turn up the white noise (usually rain, sometimes the ocean). I kiss his big fat cheeks and with a "Goodnight, Sweet Dreams!" I put him in his crib with his two loveys (Tigerbear & Gorilla) and leave the room. I love our routine (except the diaper/jammie part where he turns into a maniac).
A couple of nights ago, he didn't take an afternoon nap and by the time bedtime came around he was a grouch. We managed to get through the bedtime story, but when it came time for nursing (usually his favorite part), he was miserable and wanted no part of it. He signed ALL DONE and pushed me away. He was flapping his hands and headed for full out meltdown when I realized he was signing WATER. I was really confused. He's always loved water, but at no time has it ever played a part in our bedtime rituals. "You want water?" I asked a few times, in disbelief. But he nodded "yes!" with relief in his eyes. 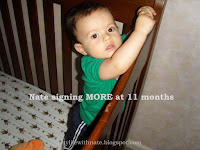 We called Daddy for some water and as soon as the cup was in Nate's hands, he was a different baby. Totally relaxed and content. He sucked it down faster than I'd ever seen and asked for MORE. After he had a little more he wanted to nurse and our bedtime routine resumed. Crisis averted!
If Nate didn't know how to sign, I never would have guessed that he wanted water. There have been so many times where the use of sign language has amazed me (like in his obsession with appliances - you can read about that here and here), but this has been the first time that it really saved the day. I can only imagine that as he gets older sign language will continue to assist us in understanding Nate's wants and needs. Knowing that we understand what he wants will ease his frustration (and ours) and hopefully help us to avoid more meltdowns. Of course when we understand that what he wants is ice cream at bedtime, instead of water, I don't know if sign language will help us with that!
*     *     *
If you're interested in signing with your baby, read about the basics here.

Looking for safe toys for your little one? Come back this Friday for our Little Sapling Toys giveaway! One lucky Nater Tot winner will receive their choice of an adorable organic Little Teething Toy.
Posted by Amber@Nater Tot at 8:46 PM