When Nate was an infant he didn't spit up much. I thought we lucked out in that department. False. Now that he's older, we have something much worse. Nate is a big time puker. (I believe I mentioned this before here.) He throws up when he's really upset. When he's mildly upset. When he's laughing so hard he's screaming. After he coughs. And sometimes just spontaneously with no explanation. I have seen a wide variety of puke flavors in a rainbow of colors. Oh wait, this is a post about Nate, not about my college days... 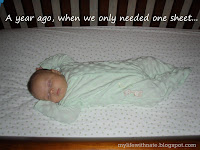 At first the vomiting really got to me. Especially when he'd vomit because he was really upset. Like during sleep training. So it was our fault he was upset. That was awful. But we had to choose between some vomit and getting more than sixty minutes of sleep at a time, so we went with the vomit. But during that time I received one of the best little mommy advice tidbits I've ever received from my friend Kristi, who I never thanked (Thank you, Kristi!) - prepare for your puker by putting a sheet on the crib mattress, a waterproof pad on top of that first sheet and then another sheet on top of that. A sheet sandwich with padding in the middle. I can't even tell you how many times this gem of brilliance saved me. It's especially handy when you're trying to clean up by yourself.
What made me think of this tidbit just now? Yes, Nate just threw up on me again. He's been in a horrible way lately - we're thinking it's teething - and sleeping has once again become a real issue. He missed his afternoon nap and was a disaster by bedtime. He had a complete meltdown while I was putting on his pajama pants and I got a bit of a chunk shower. How gross is that phrase?! I think I just coined that term. Feel free to use it as much as you would like! How dare I try to dress him for bed. Poor little guy. I didn't have to use the sheet trick, since most of it was in my cupped hand and on my shirt. But it did make me realize that I'm kind of getting used to it. Sigh.
So mommies - what's the best little tip you've heard from another mom? Don't keep it to yourself!