5 Things I'll do differently next time around

My friend and I were just discussing my old pediatrician, who advised us to let Nate cry it out at four months old.  "Shut the door at night and don't go back until the morning." I thought his advice (which was more of an unsolicited command) was so stellar that I changed pediatricians. I didn't want to let Nate "cry it out" - I thought it was cruel. But, after many, many months of sleepless nights and days I now thank Ferber

and his modified cry it out method for any periods of success we've had along the way.

So, next time, would I just go ahead and sleep train with Ferber at four months? No, I don't think I would. But when it comes to sleep, I will be doing things differently. And I've learned a few things about myself in other areas as well. Here is my list of five things I will do differently next time...

1. No more sucking to sleep - I don't want to use a cry it out method at four months. Even though Ferber has really helped us, I used it as a last result. I'm just not comfortable using it unless I've exhausted other, more gentle methods. That said, I don't want a repeat of Nate's sleeping patterns either. It's so easy to develop "bad" sleeping habits. One moment you are just trying to survive the newborn period while giving your baby all the love and comfort you can...then you blink and you've created less than ideal habits/sleep associations that affect your household for months to come.

I nursed Nate to sleep for many months of his life because it worked so well...until it didn't. My plan next time is to enjoy the cuddly newborn time and just do whatever works. But after those first three months are over, I intend to take the baby off the breast before it falls asleep and encourage the baby to fall asleep on its own in his or her own sleeping quarters. And I don't think I would start any official sleep training before six months of age at the earliest.

2. More kangaroo care - Someone in my life, who shall remain nameless, thought this meant male breastfeeding.  While that would be spectacular, it's just skin-to-skin contact between the baby and his parent. It's used a lot for premies; studies have shown that the babies receive tremendous benefits from the contact. But even for completely healthy babies it just feels really nice. I didn't do it much with Nate, and I am not quite sure why. For a baby born in August he wasn't hanging around in his diaper nearly as much as he should have been.

3. More Baby wearing - I carried Nate in the bjorn a fair amount in the beginning. But he became really heavy really quickly in the first six months. So I wasn't able to do it for as long as I would have liked. As I've mentioned before, I plan to get a carrier that will last longer and be more comfortable if I have another giant baby.

4. Try cloth diapering - it's better for the environment and much cheaper in the long run. You also don't have to worry about what toxic chemicals are coming into contact with your baby's skin (like the Pampers Dry Max controversy). Cloth diapering didn't even cross my mind for Nate. But I've heard a lot of great things from cloth diapering moms in the past year. Hopefully our washer and dryer situation will have improved by that point. (We currently have very old, small machines and they are located on two separate floors.)

5. Slow down on the solids - At four months our pediatrician gave us the green light to start Nate on cereal. I waited a couple of weeks, but he was still only four and a half months when he started eating the rice mush. I realize now that I shouldn't have hurried. The AAP recommends exclusive breastfeeding for the first six months, and I'd like to adhere to that next time. Poor Nate suffered horrible constipation (his record was eight days of no poop!) when solids were introduced. And maybe it was a coincidence but his sleeping took a huge nosedive at the same time. His system didn't work things out for many, many months. So when tallying up the decision to start solids at four months we have: CONS = constipation, earlier weaning, cost of buying food; PROS = none. 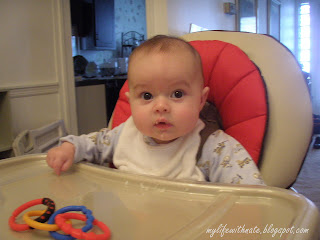 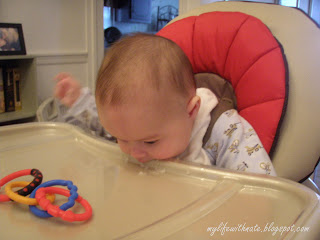 Natey eating his tray at four months
So what did you do differently with your second child? What will you change next time?