I have to say...I had a pretty awesome childhood. I have about a billion fond memories and one of them is playing with the homemade play dough my mom would make for me. Since I've been feeling pretty non-creative with our playtime lately, I thought it was time to whip out the big guns and do a fun crafty thing. I don't know if making play dough actually qualifies as a craft, but you get the point. I was ready to do something different and fun. The great thing about making it from scratch is that even if your kid stuffs a bunch in his mouth, there is nothing to worry about. Well, I guess you could worry about the state of your carpet when he spits it out in disgust.  Here's my mom's recipe, it's actually super easy:
Lelly's Homemade Play dough
Ingredients:
Directions:
Mix flour, salt and cream of tartar in a pot. Add oil, water and food coloring. Cook over medium heat, stirring regularly. Cook until mixture forms a dough-like consistency and stirs into a ball. Let cool and wrap in plastic or air tight container. 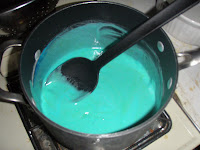 That's it. It's really easy. As for containing the play dough, I hate using plastic wrap. If you have a glass container with a snap-on cover, that would probably be ideal. Nate was pretty freaked out at first: 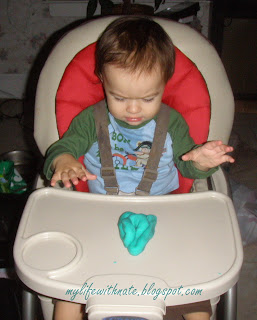 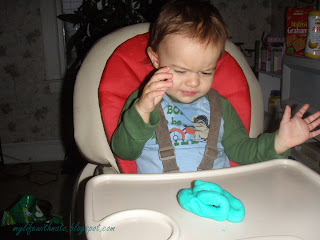 But he got the hang of it today... 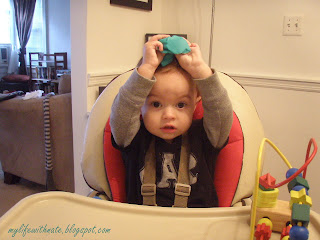 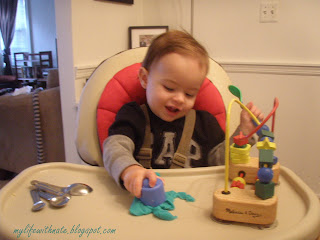 What about you? Do you have a homemade play dough recipe? My friend told me about one that includes cinnamon, so it smells amazing. It sounds great, but I don't think I'll be adding cinnamon next time. Nate would definitely eat it if it smelled like a giant cookie. I probably would too.﻿
Posted by Amber@Nater Tot at 8:30 PM