And some of Nate's favorite things... 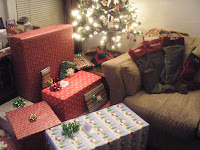 The magic of Christmas, long dulled by the realities of adulthood, returned for me this year. I haven't been filled with this level of anticipation on Christmas Eve in a long time. While Nate is still too little to understand that Santa is coming, he certainly does appreciate new toys and new experiences. Wrapping all of the presents we had hidden away while we watched It's a Wonderful Life and The Bishop's Wife

, planning the video angle and method in which we would reveal the mountain of treasures and then imagining Nate's reaction to the pile of boxes made for a very special Christmas Eve. I know it will only get better in the years to come (until some bratty school friend drops the bomb that Santa doesn't actually operate an elven sweatshop up north) as Nate gets older and understands the full meaning of Christmas (you know, the important stuff, like good behavior is rewarded with monetary gifts and it's okay to gorge on cookies at certain times of the year).
Between Santa and the generosity of relatives, Nate got a lot of great toys and books this Christmas. Here are some of his current favorites:
Dino rocker 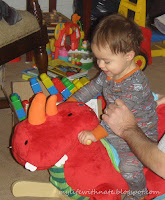 I know I already mentioned the rocker, but I'm so psyched he likes it, I have to mention it again. It was the big gift from Santa, first present to be opened and first to be summarily rejected. "NO." I'm glad Nate gave it a second chance. It's the perfect size for his little legs and he can rock away all by himself yelling "GO!" without fear of falling off. And as I mentioned to Glamamom, the Rainbow song has become our family anthem.

Daddy picked out this P.D. Eastman book since he remembered it so fondly from his own childhood. It is a huge hit. While the book is one of the longest in his collection at sixty-four pages, that doesn't prevent Nate from sitting through the entire story and then asking to read it again. And again. And of course, Nate can yell "GO!" over and over again. So it's a win-win for Nate and the parent reading the book. 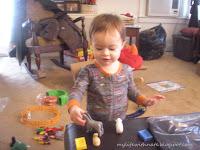 After learning that Playmobil toys are made with a safer plastic (bpa, pvc and phthalate free), my parents got Nate this very cool set. There are tons of little people that bend (and their heads spin around Exorcist style too!), vehicles to drive, and of course the animals and their accessories. Nate likes moving the little pieces around from one place to another and I think this will really grow with him too.

What were the big hits from your holiday?