These are a few of my favorite things...

Merry Christmas weekend! I've been soaking in the extra time with my family (my husband took a few days off) and blowing off my blogging. Nate is at an amazing age where he is learning so much, so quickly. I am finding him so incredibly adorable - especially when he's playing with Daddy. Those two are quite a pair and it's hard to resist spending every available second with them.
My friend Jennie at A baby and two schnoodles often posts about her "favorite things." She shares the cutest moments and little anecdotes about her son John (who is just a little younger than Nate).  I always love reading them - John is so cute, incredibly smart (and a fellow non-sleeper) and I am always left thinking that he and Nate would be great friends if they only lived in the same state. So I am ripping off Jennie's posts (isn't that the highest form of flattery?) and telling you about my recent favorite things:
- Nate has become absolutely obsessed with all of the holiday decorations in the neighborhood. He talks/signs about them ALL day long, whether he's asking to see them or just wants to chat about their existence. He loves the "snowmen with the carrot noses" and talks about them by signing CARROT (with a crunchy carrot sound) and then pointing to his nose - well, next to his nose. Other favorites are the deer ("deee") and the LIGHTS, which he now signs perfectly. We are currently being dumped on by the blizzard of 2010, and I cannot wait to make our own real snowman tomorrow. Too bad we only have baby carrots for the nose.
- This video (especially the last ten seconds):
Santa brought Nate a Dino rocker

from KidKraft
- Our local grocery store had a giant inflatable turkey in the produce section throughout November. Nate was totally enamored with the turkey and as soon as we entered the store he would wildly sign HAT (the turkey was wearing a pilgrim hat) and beg to go see the ﻿bird. At first, he was very disappointed when the turkey was taken down after Thanksgiving. His disappointment didn't last long, though. A Christmas tree was put in its place and suddenly Nate was saying the word "tree" and signing it perfectly (not an easy sign) out of nowhere. God help us when that tree is taken down after the New Year. 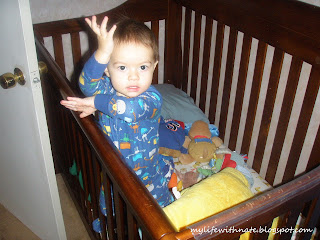 Nate signing TREE
- Nate loves prunes and eats them often as dessert. He says prune in the most adorable way. All soft spoken - "pruuuu."


- We think Nate is going through a bit of the separation anxiety. He must say "Daddy. Daddy. Dad. Daddy. Daddy..." five thousand times a day. It gets annoying, but it's still pretty cute. Especially since it's a break from "Mama, mama, mommy, mama...."
- In line with our separation anxiety theory, Nate has suddenly been asking for frequent hugs. Many, many hugs. And we're already a pretty lovey dovey family. In the middle of dinner, diaper changes or his bath, he'll suddenly start bear hugging himself with the most imploring "PLEASE HUG ME NOW?" face you have ever seen. Impossible to deny. Even if he is covered in avocado from dinner or water from the bath.
- We went to the children's museum the other day. Later on that day and several days after, when discussing what we did at the museum, it was obvious that Nate clearly remembered what we had done. He gave us this dreamy "oh yeah that was awesome" look, along with a patented Nate "oooooh," every time we recounted a specific activity. He loved  the bubbles and the fake seeing eye dog the most. He kept signing DOG and then petting his ears and nose to show what he had pet on the dog. 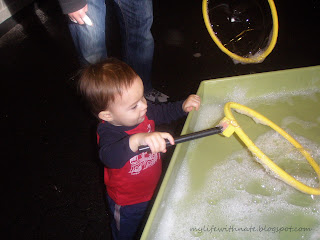 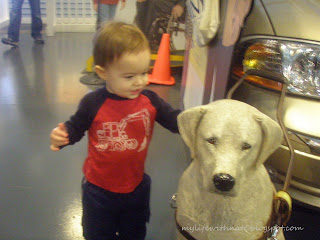 - Christmas with Nate was so much fun. More on that later.
Are you a breastfeeding mama? You may be interested in my breastfeeding articles HERE.
Posted by Amber@Nater Tot at 9:14 PM