Some parents are flexible when it comes to scheduling naps and mealtimes...others are not. I am of the not variety. It isn't because I'm anal (although that is certainly true when it comes to certain things), it's because if we don't stay on schedule life gets very challenging. Nate has never been a great napper: he's particular about the way in which he falls asleep (most of the time he won't just pass out in the car like many kids or pass out eventually from exhaustion) and the window in which you can get him to nap is small - if you miss that window he may not nap at all. Without much effort on his part he could forfeit a nap entirely and become a complete grump on and off for the rest of the day. Not fun. Especially if you are trapped in a car with him coming or going from an activity.
So for most of his life, scheduling activities has required a lot of planning. And then inevitably the plan goes awry and in the end all the effort wasn't worth the payout.  But I think finally maybe things are starting to turn around. Either that or we're having some great luck. We've had day trips in the city (NYC) the past two weekends with great success.  For one thing, now that Nate's older, we can entertain him easier in the car with conversation. But more importantly he only needs one nap a day now (unless you count this past week where he was waking up at 4:30 every morning and needing -although not always taking- two naps), so that opens up bigger chunks of time for activities.
Since Nate loves animals, we decided to take him to our favorite museum - The American Museum of Natural History. This was so much more fun for Nate than the zoo a few months ago. That may have a lot to do with Nate mercifully falling asleep in the car on the way to the museum (and missing our hour long search for a parking spot - which we only found after deciding that we would suck it up and pay the ridiculous parking garage fee, which I think is three fingers for two hours). Nate was able to attack the museum with a full tank of gas, getting a huge kick out of walking right up to the glass and seeing all of the exhibits so closely. He ran around for about an hour an a half, loving every minute of it. 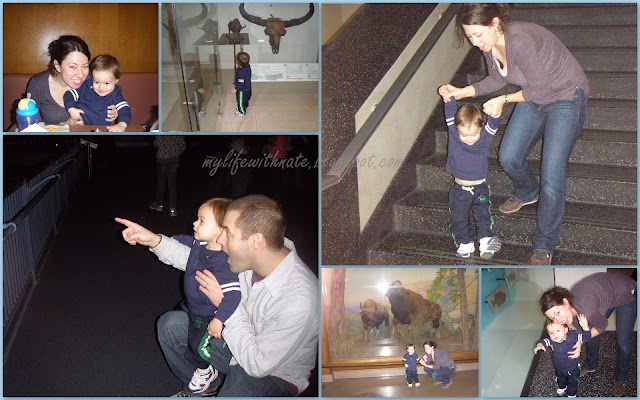 ﻿He's had almost as much fun recounting the trip over and over again today. Of course certain exhibits stood out for him. When we ask him what he saw, he tells us (usually in this order): elephants, dinosaurs, eyes (the dinosaur's eyes - in the skeletons...hmmm...), babies (tiger cubs), water buffalo, deer and guys (the figures in the Hall of Asian Peoples). Of course, going up in a crowded elevator and walking down the many flights of stairs was also very exciting for him. The elevator was less exciting for me. I had to tell him to stop kicking the woman standing way too close to us, while secretly hoping he would kick her hard enough to get her to move. Ah, claustrophobia!