, I thought it would be perfect for Nate. It's the award winning (well that's what it says everywhere - I have no idea which awards - but it sounds impressive) all purpose toy from Sweden that kids can turn into anything they want. Like a chair. Or a hat. Perfect!
Dave told me not to get it: "It will just be another piece of barely used junk on our floor." But, honey... didn't you hear? It's AWARD WINNING. From SWEDEN. Sold! 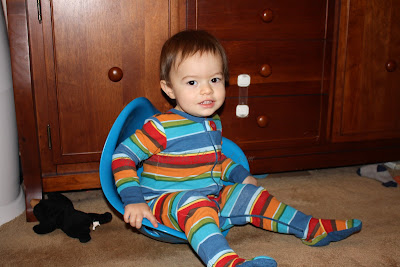 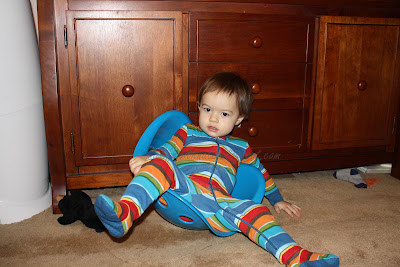 But he just doesn't quite have the hang of it
Okay﻿, so far, Dave is totally winning. It's not getting much use. Nate's having a tough time sitting in it by himself without slipping. And though he enjoys me spinning him around in it, he doesn't seem interested in doing much else with it. But I'm not giving up! I think that maybe he's still a little too young and will appreciate it more in a few months. We'll be back, Bilibo, we'll be back.
Anyone else have the Bilibo

? What do your kids think of it?
Are you a breastfeeding mama? You may be interested in my breastfeeding articles HERE.
Posted by Amber@Nater Tot at 7:24 AM