Coming out of the closet

We have accumulated so much baby stuff. And I'm mostly to blame. I can't stop trying to find amazing toys that will totally rock Nate's world. I like to think I'm getting a little smarter about my purchases, but really you can never know if your kid is going to like something (and for how long) until it's in your home. So of course you end up with a lot of stuff that your child never looks at twice. I've been storing a bunch of the lesser loved toys away in a closet, in the hopes that Nate will like them more at a later date because he's either reached a different stage or just thinks they're new (because of course, new is always better).

I bought some safer (non-toxic) toys from Green Toys when Nate was about ten months old, including the Green Toys My First Red Tug Boat

and the Green Toys My First Stacker. They're a cool company - all of the toys are made in the USA from 100% recycled plastic and are bpa, pvc and phthalate free. I really wanted Nate to love them. But at ten months, he just wasn't that interested.

The only action the tug boat got was in our kiddie pool. Like twice. 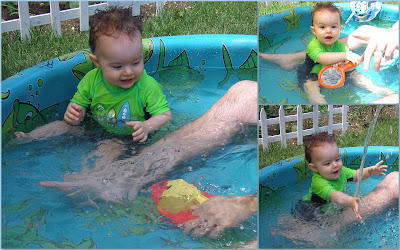 Nate at ten months
I reintroduced the tugboat and stacker about a month ago﻿ and they were a big hit. Nate's now completely obsessed with the boat and insists that it join him in every bath. He likes to scoop the water out of the baby tub (into the bigger tub) with it and for me to use it to pour water at various speeds onto his fat little belly. As for the stacker, he enjoys making carpet crop circles with it: 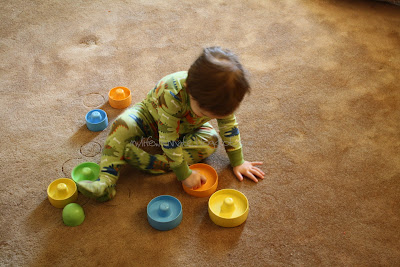 What about you - any successful toy reintroductions?
Are you a breastfeeding mama? You may be interested in my breastfeeding articles HERE.
Posted by Amber@Nater Tot at 8:45 PM