This is our dog Ava: 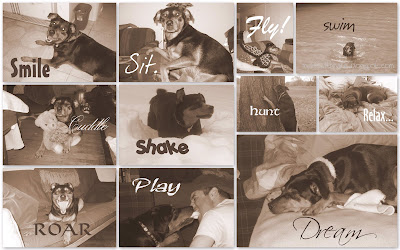 I rescued her in 2003 when she was about ten months old. I was living in a tiny studio in Brooklyn at the time - one that didn't allow ﻿animals. She wasn't house trained, was extremely rambunctious and became attached to me immediately. The feeling was mutual. When Dave came into our lives, it took her awhile to get used to him, but she quickly became crazy about him. She stopped growling at him when he hugged me and started pinning him down to lick-attack him instead. She has been a major presence in our lives. So much so that she was the star of our wedding reception - each table was named after one of pictures/poses.
Lots of people tell you that when you have a baby you stop loving your pet. We haven't stopped loving her, but she isn't the focus of our lives anymore. Before Nate, she had lots of attention and walks around city blocks. Now she has a yard, fewer walks and a lot fewer cuddles. She gets in the way, wakes Nate up with her barking and is often times a general nuisance. If I'm not cleaning up Natey's bodily fluids, I'm cleaning up hers.
There is a saying in a book I have, Zen Dog, that I often think of when I'm silently (or not so silently) cursing

her for being a pest: I don't get tired of you. Don't grow weary of being compassionate toward me. She really is a good girl. And she has been fantastic with Nate.
Luckily for her, Nate has been as fond of her as she has been of his highchair leftovers. DOG was one of his very first baby signs. So we thought for sure that "Ava" would be one of his first spoken words. But Nate started talking and "Ava" would just not come out of his mouth. Month after month we tried to get him to say her name, to no avail. The child would say "iron" and "yak" and "denude" but not Ava. I don't know how many words he says, I'm sure over two hundred, and it was not until the last week or two that finally he started saying it....Ahh-va. In the sweetest little whisper voice. Ahh-va. I think they're going to be great friends.
Are you a breastfeeding mama? You may be interested in my breastfeeding articles HERE.
Posted by Amber@Nater Tot at 8:46 PM