Um, yeah, I don't have any. And not because I think it's creepy and weird to sit on those rental costume Bunnies and Santas. (Which I do. I always feel like the people underneath the costumes have STDs and sex offender records. No offense Mr. Bunny.) But because that line was just ridiculously long. I did feel bad though - Nate was overcome with the inexplicable and very strong desire to hug the Easter Bunny and "pet" him. He had to settle for blowing kisses and waving to Buns instead... and then stalking him through the window to throw even more kisses and to say goodbye. Many, many times.
So here's a springy, flower-sniffing picture instead: 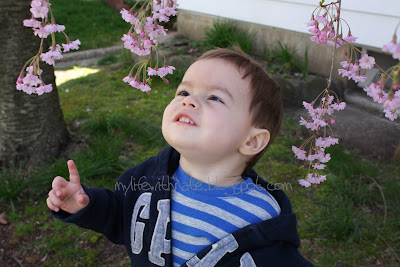 How about you? Have you previously worked as an Easter Bunny and want to express your anger with me for outing you as a sexual predator? Leave a comment! Otherwise, enjoy your weekend.
﻿
Are you a breastfeeding mama? You may be interested in my breastfeeding articles HERE.
Posted by Amber@Nater Tot at 12:36 PM