I finally got my hands on the ﻿Kinderville Little Bites Ice Pop Molds I've wanted for over a year (scratch that off my summer wish list).

They have such a cool design. It works as a push up, so as long as your kid can keep the pop from coming all the way out of the mold it's much cleaner than a pop on a stick. Children are sticky enough as it is. And they are made from non-toxic silicone, which I love. Easy to clean, bacteria resistant and free of toxic chemicals. If you aren't familiar with all of the benefits of silicone you can read more on the Kinderville site. 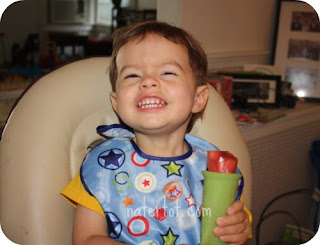 I had these grand designs of using them to incorporate more fresh fruit into his diet by making a new exciting, yet healthy, flavor everyday. I had visions of magnificent ice pops made from peaches & blueberry yogurt, cherry & limeade, spinach & pineapple - kidding - but so far we have only made one flavor and it was kind of a bust. I mixed organic strawberry lemonade with bits of sliced strawberries. Sounds good, right? I thought they were refreshing, but Nate wasn't that impressed. Admittedly they did lack the punch that those yummy artificial flavors provide.

The cool thing about the molds is that if your kid doesn't finish the pop you can recap it and refreeze it for later. I don't know if there is a bacteria issue with refreezing an ice pop covered in toddler cooties, so you might just want to eat them yourself to be on the safe side. That's pretty much my philosophy when it comes to all of Nate's leftovers. Especially if we're talking about cookies or muffins. You just can't be too careful.


Have any ice pop recipes I can steal? Apparently I'm too lazy too actually find one and experiment on my own.
Posted by Amber@Nater Tot at 1:09 PM