You're not quite two years old, but I feel like suddenly we've been hit by Hurricane Classic Two Year Old. Your favorite phrase is "BY SELF!" which of course means that you want to do it by yourself - whether that it is climbing in and out of the tub, getting into your high chair/car seat/stroller or just about anything else (especially if it involves climbing).  Your new independence, climbing abilities and size have allowed you to graduate to a number of "big boy" activities - you've conquered all of the big boy equipment previously off limits at the park, you're finally officially out of your baby tub and you're really into using your big boy forks at mealtime.

﻿﻿
I thought that maybe, just maybe, we were going to make it through your toddler years without those horrible meltdowns that are the hallmark of the "terrible twos" - but it looks like I was being naive, or as you might say, "SILL-LEE MOMMY."  While it looks like we avoided earlier tantrums - caused by frustration over the inability to communicate your needs (either due to our use of baby sign language or simply your temperament), you now face the overwhelming emotions that accompany your drive for independence. You're dying to be self sufficient and in control, but it can be scary when you achieve it and frustrating when you can't. These emotions, accompanied by lack of sleep or hunger (the former caused by me changing your nap routine and the latter by your refusal to eat much of anything) have caused some crazy pants fits. Your head hasn't spun around, but there has been some projectile vomiting.
I also thought that we had avoided that negative "no" phase. Well, you may have never gone around answering "NO, NO, NO" to every question when you started talking, but your "STOP IT!" phase has been just as lovely as I would imagine the "no" phase to be. For about two weeks straight you screeched STOP IT! to your parents about five hundred times a day. You've enjoyed exerting your control over others and certainly have a right to ask us to stop our annoying parental activities - singing or tickling you or changing your diaper (how dare we?!). But it's when we were just standing there, not doing much of anything at all, that the STOP IT! command was particularly aggravating confusing. "Stop sitting here - being your mother?"﻿
﻿You still love yard work, trucks and Bono. You're still a beautiful motor mouth, often talking in five and six word sentences. You still make me laugh, especially with our inside family jokes - particularly the school bus/cheese bus debate of 2011.  And also with your impersonation of the Grabbing Police. If anyone even looks at something you're holding with the intention of touching it, they are met with a swift command of "NO GRABBIN!" Sometimes you even lay down your "NO GRABBIN!" charge while in the act of grabbing something yourself. We have to discuss the meaning of irony. ﻿
Like your beloved Curious George, you seem to want to know everything about everything. Wait - does Curious George want to know about everything, or does he just like to get into everything? Daddy reads you those stories. I really should pay more attention. In any event, I've been explaining things to you in greater detail and you seem to really soak it all in. 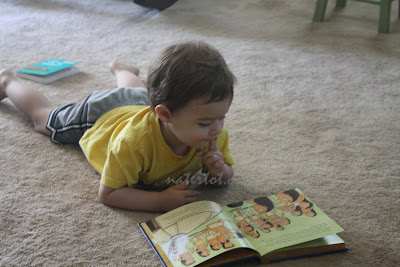 If you can play with kids every day and also get some ice cream or MUNCHINS (Dunkin Donuts muchkins) thrown in there, you're a content little boy. Your wish is generally my command.

I love you more than tongue can tell.  ~ Mommy
Posted by Amber@Nater Tot at 2:18 PM