I think loveys are a helpful part of a bedtime routine, and since I'm so obsessed with Nate's sleep, I've been trying to push loveys on Nate for a long time. ﻿My mom warned me that you can't really pick a beloved item out for a kid - they have to do the choosing. (Apparently my choice was a soft white blanket with silky trim that eventually turned a lovely shade of gray. Oh Blankie, how I miss you!) But that didn't stop me from trying. We first tried "Tiger Bear"

- an easily replaceable, small organic stuffed animal. Nate was not impressed.
Then we tried various members of the Sesame Street gang, since Nate loves them so much during the day. He liked playing with Bert, Ernie and Elmo, but he didn't seem particularly attached to them. He really like his stuffed gorilla for awhile, but that bromance never really went anywhere either.
I had pretty much abandoned all hope of finding a lovey when Nate discovered Ashaun. Or rather, both of "the Ashauns." 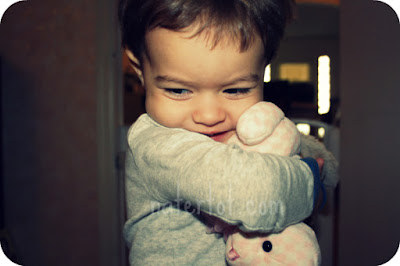 I don't remember which Ashaun came first, but at some point after Easter, he decided the bunny that came from his basket was Ashaun. On a side note, Nate picks great names. His rocking horse is Bep, for awhile everything was named Steak and now any newly named animals are Sitar. And right around that time he found a smaller pink and white checked bunny in a drawer (which must be mine, because I'm sure I would remember if someone gave him a pink bunny 'cause I'm totally sexist), which he informed us was also named Ashaun.
Sometimes they're big Ashaun and little Ashaun, sometimes Ashaun One and Ashaun Two, but mostly they are "the Ashauns." Whatever we called them, they quickly became the big bunnies on campus. They joined us at story time, right before bed. They were given a turn at the milk bar. (Yes, my son made me breastfeed stuffed rabbits. Awesome, right? Hi, Dad!) And most importantly, they were invited to sleep over in Nate's crib every night. Official lovey status.

Like many relationships, the adoration waxes and wanes. Today, just as I was thinking he was maybe getting over the Ashauns, Nate grabbed them ("ASHAUNS READ STORY!") and pulled them up into my lap for pre-naptime stories. Then he turned little Ashaun to face him and said, "Hi Ashaun! I missed you!" and planted a big kiss on his face. Guess I was wrong.