Some scattered Friday afternoon thoughts about my favorite two year old...
There are several areas in our life that require a discussion of who is an adult and who is a kid. These talks mostly revolve around knives, crossing the street and climbing playground equipment. For example, Nate really enjoys climbing the "big kid" equipment at the park. He'll run over and start climbing before I can get there, which results in just about the same conversation every time:

Chubby little baby Nate was incredibly cute, but I think this kid of mine is pretty adorable too. He now grabs my hand, pulls me and says, "COME ON MOMMY! LET'S PLAY GAMES!" (By the way - I type most of what Nate says in all caps, not because he's always yelling, but because he always sounds excited.) I just love that he's started grabbing my hand.

And he has a great memory. We brought home a ton of books from the library yesterday, including one about firetrucks. He was reading it on the floor when he popped up, walked over to his book bin saying, "LET ME CHECK SOMEPIN'!" He pulled out one of his own books, flipped to the vehicle page, pointed to the fire truck and told me it was the same. I thought it was odd that he was making such a big deal about two random firetrucks until I looked closer. The library book had a large picture of truck 231 in a fire fighting action shot. Nate's book had a small picture of truck 231 just sitting there with a white background. But they were the same exact truck. I was amazed.

You know what else this kid does? 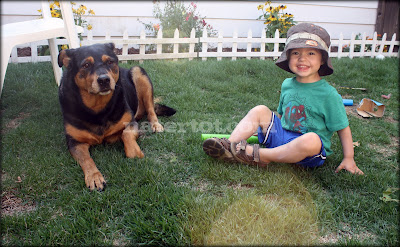 He talks to our dog. He shows her his books. And he tells her if he has a boo-boo. Every day he tells her, "I LOVE YOU!" And every night he says, "GOODNIGHT AH-VA BEANS!"

I like this age very much.
Posted by Amber@Nater Tot at 2:30 PM