I don't trust parents who are above bribing their children

I know that there are camps of parents that are anti-praise and anti-reward, especially when it comes to potty training. I am not one of them. I think that thoughtful praise can be a powerful thing.  And I'm all about rewarding good behavior and effort - especially when the family is working to modify a behavior. I don't think kids should have treats shoved at the them in exchange for decent behavior on a regular basis, but I certainly wouldn't judge a mother for occasionally coaxing her child into his stroller with the promise of a munchkin (um, not that I would know anything about that).

At twenty months, Nate expressed an interest in using the toilet and potty training started out with a bang. After a few months, his interest waned - which was fine for me, because I was in no hurry to rush him. But lately Nate has been expressing a new interest in wearing big boy underwear (aside from on his head). While I know he physically has no problems getting to the toilet on time, he seems less interested in regularly stopping play and using the potty to achieve his new underwear goal. I recently read an article about using sticker charts on The Baby Sleep Site and decided to give it a try with Nate. So here is our new strategy: 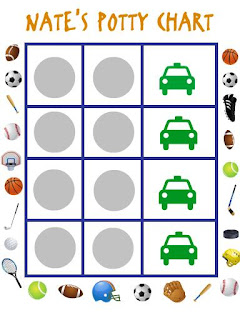 One successful time on the potty equals one sticker. Two stickers equals one little toy car.  So far, so good. After two days, almost everything has been on the toilet. I think he is just as excited to put the sticker on the chart as he is to receive the car.  We will see where we are a week from now. Hopefully out of cars.
Posted by Amber@Nater Tot at 1:53 PM