We have hit a breakfast slump. Nate ate pancakes every morning for like a year and a half, and it looks like he's finally gotten sick of them. Instead of eating any of the alternatives I offer him, he usually decides to go hungry until I offer him a peanut butter sandwich a couple hours of hours later.
Nate has a new obsession with cranberries and a long running obsession with muffins, so I thought I would try this cranberry bran mini muffin recipe from weelicious.com.  Nate was really into making them, and they turned out  really well (although a bit too cranberry-y for me) even though I added lemon juice to the milk to substitute for buttermilk and I only put in half the honey because I ran out.  They're good and total Nate food. 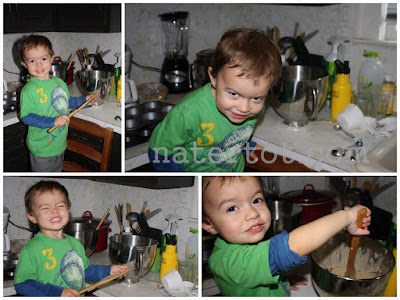 And Nate would realize this too....if only he would just TRY them. I think I might have to stick them in a peanut butter sandwich if I ever expect him to taste them.