Pink boots are for girls

A couple of weeks ago, Nate and I were at the store looking for winter boots for him. I learned my lesson last year regarding kids clothes and the changing seasons. Get your gear early. By the time we'll actually need the boots, they'll be sold out of anything appropriate. Then in desperation, you'll order something online, they won't fit and you'll be too lazy to return them. So they'll just sit in the dining room, half out of the box for MONTHS and stare at you. Or, you know, something like that.
Anyway, we were looking for boots and I was putting various styles and colors on him and asking his opinion. Because he most certainly has one. And I like his input too. He spotted a pair of hot pink boots and asked, "How 'bout the pink boots, Mommy?"  I told him the pink boots were for girls. As soon as it came out of my mouth, I felt awful. How stupid is that? Only girls can wear pink? I've discussed this with my good friend before about how ridiculous it is. If Nate was a girl and wanted the navy blue boots, I wouldn't have hesitated  to let him try them on.  But boys aren't supposed to wear pink boots.
He wasn't even fazed when I told him he couldn't try on the pink boots. He just accepted it and happily supported the choice I ultimately made - I think they're green and gray. But two weeks later it is still bugging me.  I mean, I can't even say - well, I did it to protect him from getting picked on by the schoolyard bullies (which is never, in my opinion, a good reason to prohibit something) - because he is two and two year olds don't care.  I guess I'm a bit disappointed in myself. What would you have done?
In other, totally unrelated news, I am really enjoying this stage in Nate's development and I'm particularly loving his interests right now. I fully support his love of trucks and cars, but since I don't share the interest, I've never been personally excited by it. But now I am discovering that he also really loves art. Nate colors and draws for hours on end (okay, not really, but a long time anyway). He loves using different media - colored pencils and pastels are big favorites. And we do an "art proje't!" just about every day.
And also? He is loving some pillow fort time. I tried forts awhile ago, but I guess it was too early. But now... 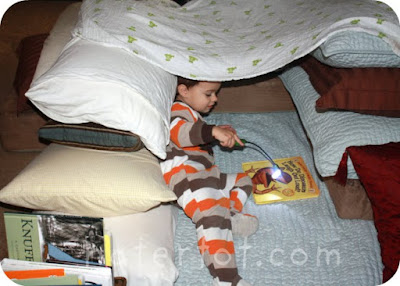 I think we're going to need more cushions. These are some interests I can really get into.