Nate's dad has a pair of heavy old binoculars, with an old shoestring for the neck strap. (He uses them for birdwatching only. Obviously.) Nate just loves to play with these binoculars.  And put the shoestring strap around his neck.  We were in the kitchen when I told Nate - for the hundredth time tonight - to stop putting the binoculars around his neck, and he quickly complied. A minute later he told me to go in the living room. ("Mom, go in wiggin woom.")  Why, I asked, so you can put the binoculars around your neck again?  "Yeaaah..." he answered with a huge, devilish grin. 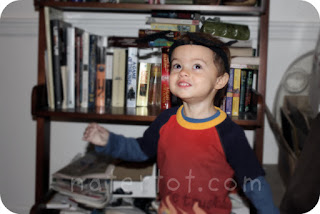 That is one of the many things I love about this age. When Nate is being mischievous and I call him on it, he will totally cop to it. He hasn't figured out the lying thing yet. Unless I ask him if his diaper is dirty. In that case, the answer is always, "no."


He's also getting really crafty. He's been negotiating for months ("Few more minutes! One more time!"), but he has hit a new level. Out of nowhere tonight at dinner he asked me if water was messy. I told him not really, but you could make a mess with it, I suppose. "Can I take off my bib to drink my water? Water's not messy."  I always convince him that he has to wear a bib when he eats pasta with red sauce because it's messy. Tricky little bugger trying to use logic to get free from his bib.

"Can I?" is a new addition to his speech. It's an awesome change from him demanding everything. And every time he requests permission for something, his voice takes on the cutest tone, with a slight rise at the end. He almost sounds like he has a southern accent. "Can I have a pea-butter sammiiiich? With bat cutterrr?" (The bat cookie cutter allows a much more efficient use of bread than the pumpkin or ghost. It makes one very nicely formed bat, one slightly deformed bat and one little baby bat.) Okay, I'll make you some bat sandwiches. "I like you."  I like you too, Nate.
Posted by Amber@Nater Tot at 10:10 PM