We finished dinner early last night and had some time to kill before Nate's bath. I started showing him some stretches for fun and he liked it. I told him the stretches were similar to yoga and his Highness allowed me to put a yoga program on tv. Last time I put an exercise video on, he flipped out and demanded I turn it off. I guess times have changed, because he was really into it this time and told me he "loved yoga!"  He then proceeded to run around like a crazy person, climb on top of me and under me as I did the poses.
I tried to turn it off so he could watch an episode of Fireman Sam as I got his bath ready (our nightly ritual). He told me to leave the yoga on and he would watch that instead of Sam. Completely shocking. I left to get things ready for bed, bath (and beyond) and when I returned I found him doing this: 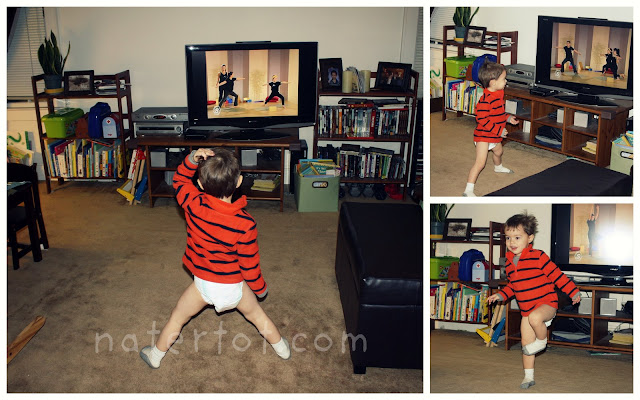 Yoga in diapers. He's definitely a fan.
Posted by Amber@Nater Tot at 10:46 AM