I told my 2 year old that he didn't have to go to college if he didn't want to.

I lied. Obviously.
I thought the talk about college would come when he was older. Maybe ten or eleven. But Nate was watching Blue's Clues yesterday and the episode was about Steve going to college (because at 30 years old he had finally gotten too old to play Blue's teenage owner and needed a way to explain his absence, other than getting laid off) . He did a really good job of explaining to Blue what it meant to go to college and that he would actually be moving out and living there. Steve asked the audience if they might like to college someday too. From the other room, I heard Nate say softly, "Yeah!" And I was thinking how cute it was when Nate ran into the next room to tell me -with excitement- that he wanted to go to college too.
And just as I was telling him how great that was...in the very next second...his little face crumbled and he started crying, telling me, "I DON'T WANT TO GO TO CA-WIDGE!"   I have never seen such a sudden and complete change of emotion on a person's face. He is so two years old. It was as if he suddenly remembered the moving out part at that exact second. He clearly thought he was going to have to move away from Mommy and Daddy, like tomorrow, if he was going to go to college.  The poor thing. Which is why I told him that he didn't have to go.
Later, we talked about it again and I explained that college was for much bigger boys and girls and he was too little for college. Never has he been so relieved to be "too little" to do something. 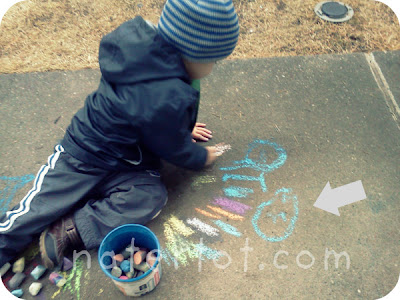 In other news, Nate made his first drawing that actually resembled what it was supposed to be. "Look, mommy, I dwaw a face!"  It had eyes and a nose! See. He's totally ready for college. I'll tell him tomorrow.
Posted by Amber@Nater Tot at 1:31 PM