Because the night belongs to Wubbers

Nate has a great command of the English language, but every once in a while he mixes phrases or names of things up and sounds a bit like he just immigrated to our country. It's very cute and of course I don't write them down like I should. My favorite example (and really, my only one) is when he sees an American flag. He gets very excited every.single.time. and says, "AMERICAN FLAG OF OUR COUNT-ERY!" When my mom visited she thought it was crazy that he knew that the stars represented states, but apparently the child will retain any information as long as it relates to the American flag of our country or U2. 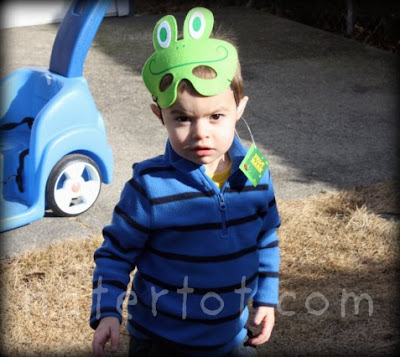 Speaking of U2, for about the last month or two, he requests at least once a day, "No Name of the Streets," which is also known as "Where the Streets Have No Name." And by the way, "She shoots in mysterious ways..."
And speaking even more of U2, we taped (well, dvr-ed) part of a Rock and Roll Hall of Fame Concert with Bono and "his friends."  Nate's really into any friends of Bono and has openly accepted Bruce Springsteen, Patti Smith and Mick Jagger into his world. Nate sings to himself a lot and today, as he ran around the yard with his frog mask on, he alternated between shouting, "Superhero to the rescue!" and singing, "...belongs to Wubbers..." It took me a minute to finally realize he was singing Patti Smith's Because the Night Belongs to Lovers.  I thought it best not to correct him. I don't need him singing that when we go to Target. Yelling, "poop, gas and pee-pee!" is enough attention for me.
Posted by Amber@Nater Tot at 10:13 PM