This is my first very late letter (almost one week!) and I feel so guilty. Even though you won't read them for years and years to come. But we've been busy lately. Planting flowers, skinning knees, creating more sticker charts, blowing bubbles, bugging the dog. You know, very time consuming stuff. 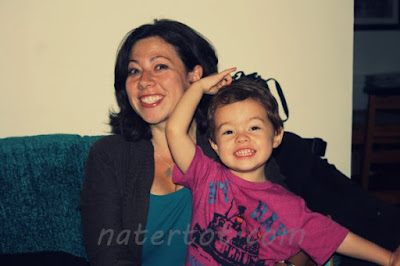 You continue to be just about the sweetest child on the planet (except when you're not, of course). You give me tons of hugs and kisses. Lately you've been randomly telling me that I'm pretty. I don't know if Daddy has been secretly training you, or what, but it's super cute. I received not one, but three Mother's Day cards from you. 2 hand made at school, one with a little help from Daddy. Best cards ever. I'm so lucky to have you as my son, Nathaniel. (Not because you gave me three cards, but because you are you.)

The things that make you the most excited on an average day are art projects involving markers, playing games on the computer, going to the park and shredding. Not like on a mountain. Like paper. You know, old bills. Normal toddler stuff.

In some ways you have started to seem more shy. You suddenly seem a bit uncomfortable around lots of new people for example. Often quieter around people you don't know very well. But then in other ways you seem bolder. And you are really ALL about music and performing. And not just for mom and dad. For other family members, friends, and anyone who will watch you. It's hilarious.  You dance, play air guitar, work the stage, sing and scream. Maybe a little piano in there too. 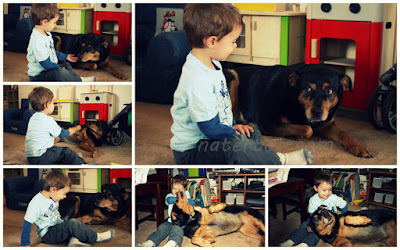 I feel like I've been a bit lax lately teaching you things in the reading/writing/numbers realm.  The other night I finished dinner before you did and so started writing out some three letter words for you to sound out. I wrote CAT, and you immediately knew it was cat. Same with HAT. I was so excited! I wrote BAT and you shouted "BUG!" Apparently I use the same words over and over again when we play this game and you've been taking note. Memorized the word and guessed based on the first letter. It's funny, because you know the sound that every letter makes, and you can say the sounds slowly, "Buh, Ah, Tuh" but with the exception of a few times (I think), you haven't been able to make that jump to sounding out the word. I feel like once it clicks, you'll be on fire.  I'll be in trouble though, since I like to spell all of the naughty words I use. I guess I'll have to switch to pig latin soon.

And I still think you're hilarious. I know I say it every month, but I do. Like funnier than most adults I know.

I love you kiddo. More than tongue can tell.