I wrote most of this shortly after you turned 4, over a month ago. I wanted to add some more to it, so I took a break. Then your Gam (my mom) died unexpectedly. So it took me until now to finish. I'll just add a few updates.  We will talk about Gam another time. I want to write a long, long list of all the wonderful things that I'd like you to remember about her. But for now, let's talk about you...

You're 4 years old now! Somehow you seem so big, but still so small, at the same time. The last year has brought quite a lot of changes for you development wise. I don't know what the big fuss about the "terrible 2s" is about. You were incredibly easy as a 2 year old. This last year has been far more challenging and I've really had to work on my patience. You're testing me more than ever, but more than that, there is a more intense emotional aspect to your reactions that weren't present before. You can be incredibly sweet and cuddly in one minute and wildly upset the next. We've seen some interesting changes in your personality. Yet many things, like a lot of your interests, have remained the same. 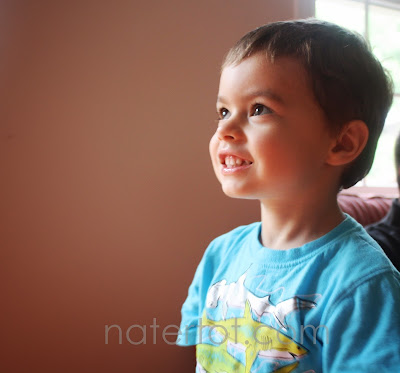 While you are capable of lots of things, you still want my help. I try to encourage you to do things on your own as much as possible, especially when I know you already have the ability. Sometimes it's tough for me to figure out when it's a "battle" that needs to be picked. I want you to be self sufficient, but encouraging it leads to a lot of conflict sometimes. You're very strong-willed, so sometimes I need to back off and do things when you're ready. Other times I need to nudge quite a bit. We said good-bye to diapers this year. Woo hoo! You now can go into the bathroom all by yourself, take care of business (well, not all business by yourself yet) and wash your hands. You get dressed by yourself, but still want me to lay your clothes out in a particular way. You can put your shoes on yourself, but the act of putting on your sneakers can often be quite traumatic. Those tongues are out to get you, I know.

Where you once would rush right into social situations, you are now much more cautious. Transitions are met with suspicion and anxiety. But then you usually adapt pretty quickly once we just get over that hump of change. For example, you had a hard time starting summer camp this year, since it meant leaving the comfort of your known classroom and teacher. You've been going to this school since you were two years old, yet you cried hysterically when I dropped you off the first day of camp. I know that many parents have to leave their sobbing babies at school and daycare. I'm one of many. But that day was heartbreaking for me, since you've NEVER cried at school before. The teacher pulled your little octopus arms off me, and I looked at your red, crumpled face and I just had to go. I had to leave you. I felt like someone punched me in the stomach. I know one day you'll be all grown up and won't even remember that day, but I know I'll never forget it. Of course, by the third day of camp you had a slew of friends and barely gave me a second glace as I said good-bye.

You didn't want to go into the pool the first day we joined either. It took an hour of watching the others before you decided to give it a try. Now it's hard to get you out of the pool. 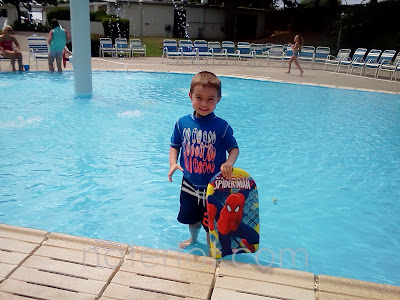 You had a lot of "firsts" this year including your first school field trip. I had my accompanying first day long heart attack. You went to so many great places and had a lot of great adventures, like puppet shows, mini golf, the police station, museums. I took you to your first play. You're now a big fan of live theater and want to go to more. You watched your first full movie, Cinderella, and quickly became obsessed.

I'm nervous about your first day of pre-K coming up, mostly because you have voiced your apprehension. You'll be going to a new school and don't have any friends in your class (that we know of). The days will also be much longer. I know you'll adjust quickly, but that first week will likely be rough. I just hate seeing you nervous and sad. Update: School has been going wonderfully! You had two "old" friends in the class and have made many new ones. You've been excited about going every day and I've been thrilled! There were no tears and the only adjustment has been at home. You're exhausted from your new schedule and have been quite cranky these first few weeks. But I think we've finally turned a corner and you're getting used to it.

You still love performing. Your U2 concerts, which once monopolized your days, now only have once a month at most. Instead, you prefer to make up your own songs and/or dance on anything resembling a stage. 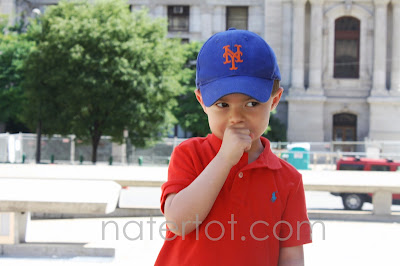 Your favorite things to do now involves pretend play. Most of the time you either want to dress up like a super hero and act out crime fighting scenarios (I am always cast as the villain) or play with little figurines (Star Wars, doll house, Jake and the Neverland Pirates, castle guys). I was really lamenting this turn in play, especially since there was so much focus on "bad" guys doing "bad" things. But then I realized that we don't need to be boxed into those conventional roles. So now Darth Vader attends dance parties at Luke Skywalker's house and Darth Maul brings the s'mores to all slumber parties on the Millennium Falcon. I don't have pictures of those parties. But here is a random picture of you in a box: 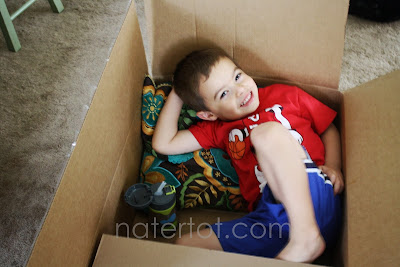 Another big change in interest has been the change from books to storytelling. While we still go to the library regularly and still read every day, you much prefer a made up story. Your favorites are "Chi Eekway" stories which revolve around the Papanoida family of Star Wars. Chi Eekway is the mom, Baron is the dad and Blue Blue and Pinky are the son and daughter. Obviously the two children with the horrible names are the ones I created. Oh and we also added "Barker" the dog. Sadly, I don't take after GG and lack little imagination in the story telling department. Luckily, you are more than satisfied when the Papanoida family does all of the things that YOU do - go on trips to the museum or to a play. They have birthdays and celebrate Christmas, just like you. Every story ends with Blue Blue and Pinky going to sleep and sleeping the whole night.

It's funny, because you previously had quite the extensive imaginary family - Boran, Tour, Four, Toof and Corn. They were a part of our daily lives, but now we hardly hear about them.  One day you surprised me by telling me Corn had died. She was 2 last year, but this year, apparently died after a full life at 99.  Time flies.

A new big interest is building machines out of legos. You also really enjoy photography. Here is picture you took of your machines:

One of the many things I love about you is that you are still young enough to wear ridiculous hats in public and not be the least bit self conscious. This is awesome. Here are a couple of examples: 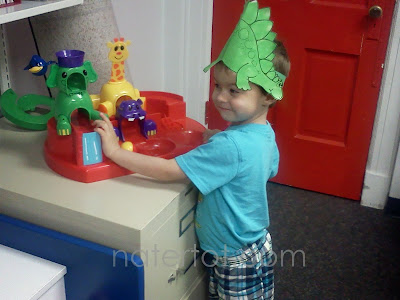 You are still incredibly funny and bright. You're full of energy and are incredibly cute. You've been asking for a lot of hugs and cuddling time lately and I am happy to oblige. I love you more than tongue can tell.